Ten years ago I backpacked around Thailand with my sister, the culmination of a six month round the world trip. Other than a couple of holidays in Bali, I hadn’t been back to South East Asia since. My partner Enrico had never been, so we decided to book a trip to Cambodia for Christmas.

There aren’t any direct flights into Cambodia from the UK or Australia, so getting there involves a stopover. (Stopping in Doha with Qatar Airlines or Singapore with Singapore Airlines). We decided instead, to fly into Ho Chi Minh City in neighbouring Vietnam, and take a bus across the border. You can fly direct to Ho Chi Minh City from London or Sydney with Vietnam Airlines.

A monk at Angkor Wat

You can fly between the main cities in Cambodia and there are a couple of local carriers; Cambodia Angkor Air, Bayon Airways and JC International Airlines. However, we decided to take the slow route and travel around the country by bus and train. We made this decision for a few reasons:

The downside, of course, is the time it takes. Most internal flights take 1-2 hours, whereas the buses take 6 – 8 on most routes. But we were happy to take this time to relax, look out the window and enjoy the scenery. 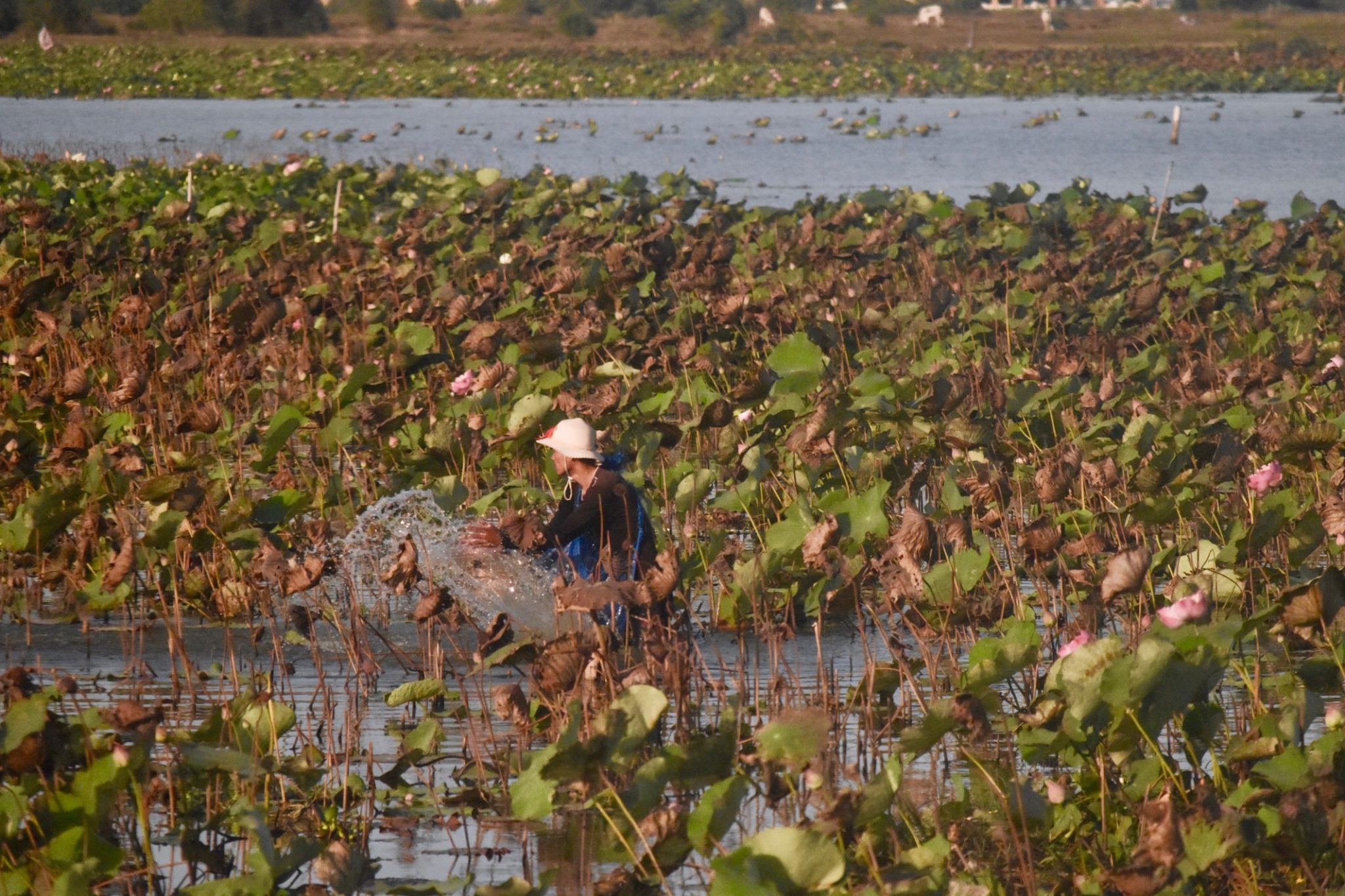 Views from the train

There are a number of bus companies operating within Cambodia and crossing the border to Vietnam. After a bit of research, we decided to book with Giant Ibis, based on the fact they are slightly fancier than some of the other carriers, and they have a good safety record. (There are lots of road traffic accidents in Cambodia). We took 5 buses with them during our trip and they were pretty good. Some buses had WIFI and in general, the driving wasn’t too terrifying. You can book Giant Ibis buses online through their website. 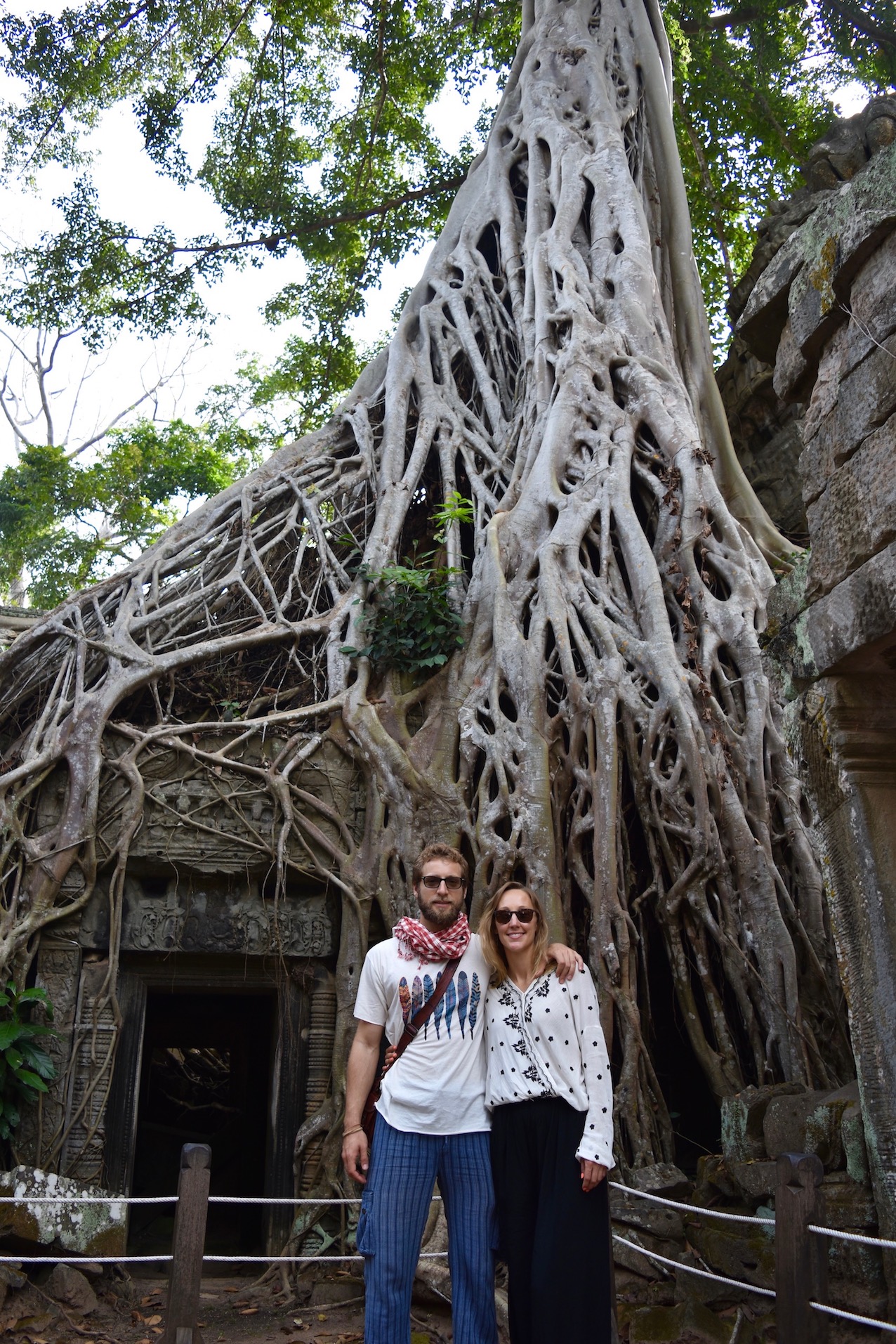 There is only one train line in Cambodia, which runs between Phnom Penh and Sihanoukville. I would highly recommend travelling this route by train. It was the nicest journey we had in Cambodia. It’s slower than the bus but more enjoyable.

The trains have been refurbished, and have air conditioning, but the carriages are still the older style, which I loved. You pass through the suburbs of Phnom Penh when departing the central station, before moving into open fields and farmland. The train also stops in Takeo and Kampot, before reaching its final destination. You can book trains in advance through baolau. 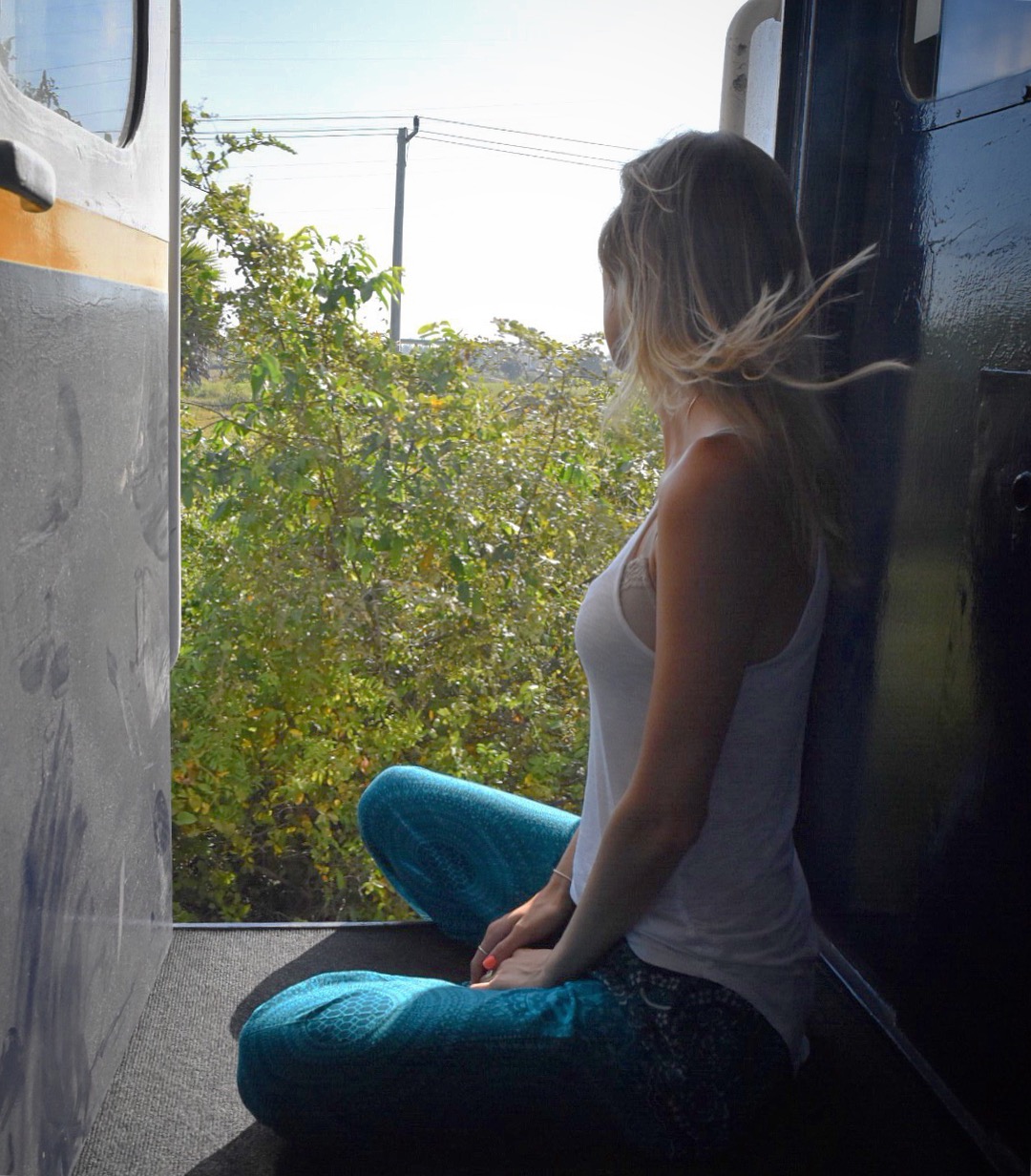 Taking the train to Sihanoukville

As we were starting and ending our trip in Ho Chi Minh City, we decided to spend a few days here either side. From here we took the bus across the border to Phnom Penh. If you’re flying straight into Cambodia, it’s likely you will fly into Phnom Penh as it’s the capital city and the largest international airport.

Phnom Penh is a buzzing capital city with lots of good bars and restaurants. As well as some important historical sites. Read about Phnom Penh here. 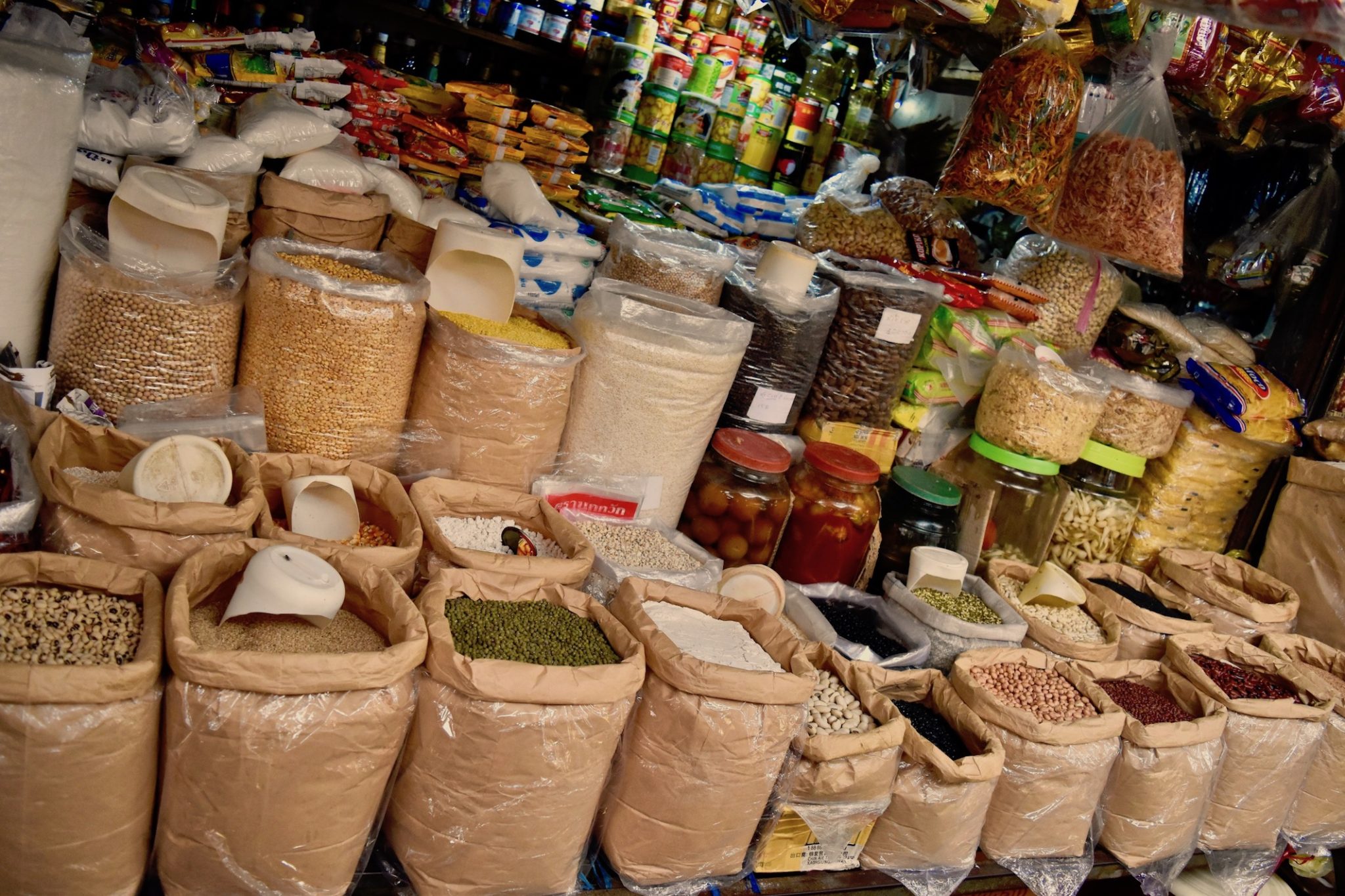 From Phnom Penh, you have a couple of options, but the most common is to either head south to the coast or head west to Siem Reap. We went south first, taking the train from Phnom Penh to Sihanoukville. 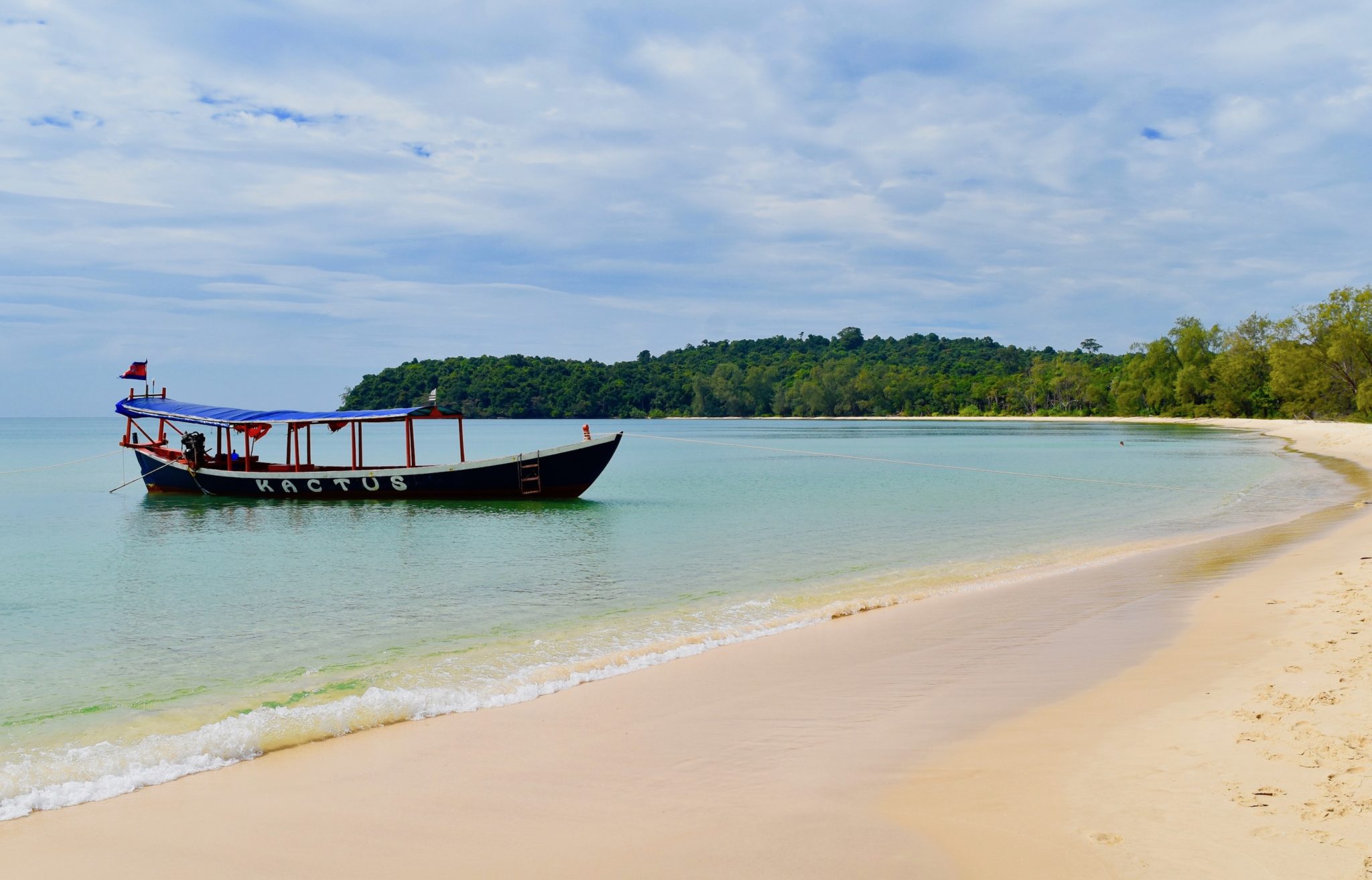 You can easily spend a lot of time in this region, exploring the islands and national parks, but with two weeks a couple of days here is about right if you want to see other parts of Cambodia. The next stop in our Cambodia itinerary was Kampot, a 2-hour bus ride from Sihanoukville. 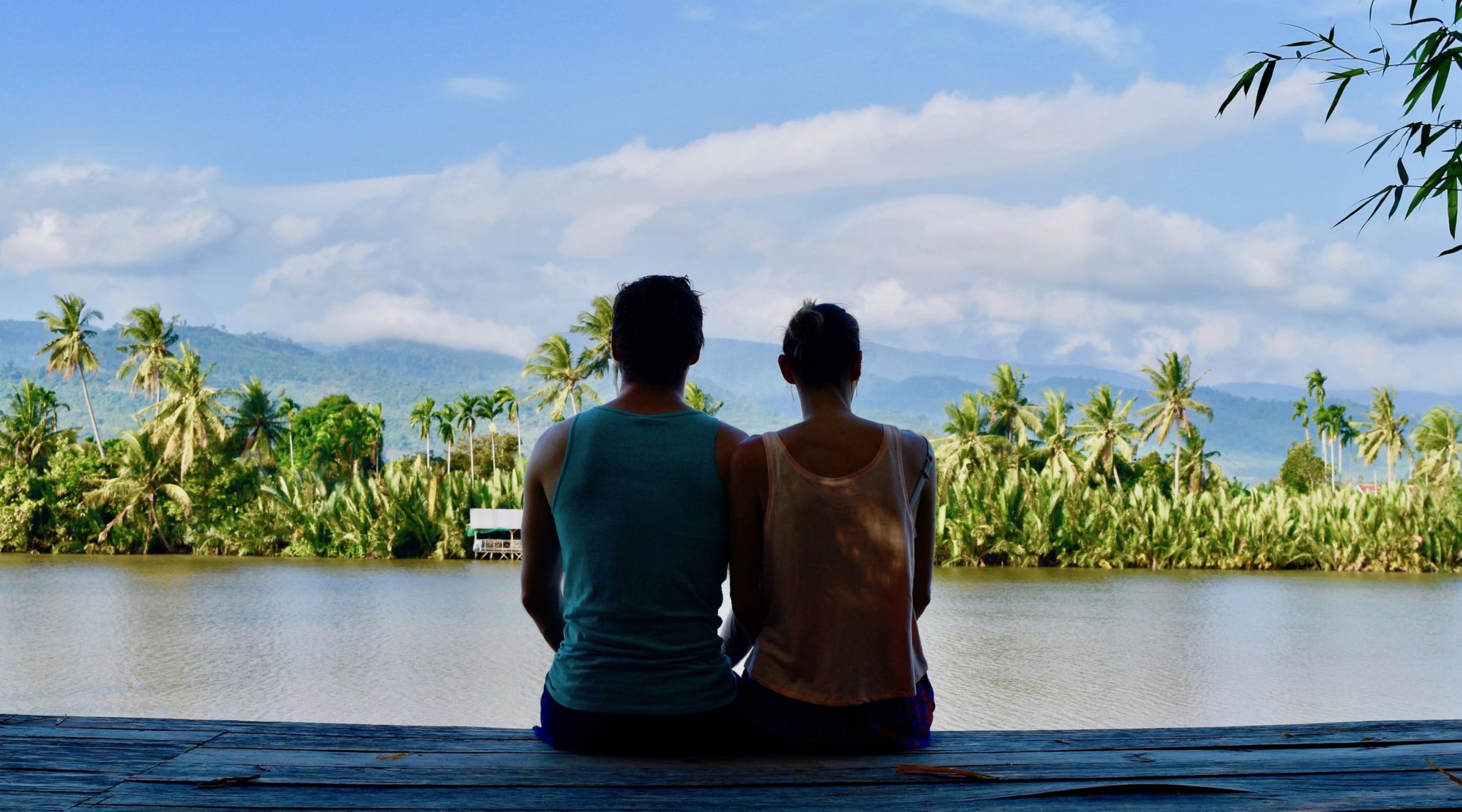 A lovely little town situated on the Preaek Tuek Chhu River. We spent 2 nights here, but could easily have spent more. Read about Kampot here. 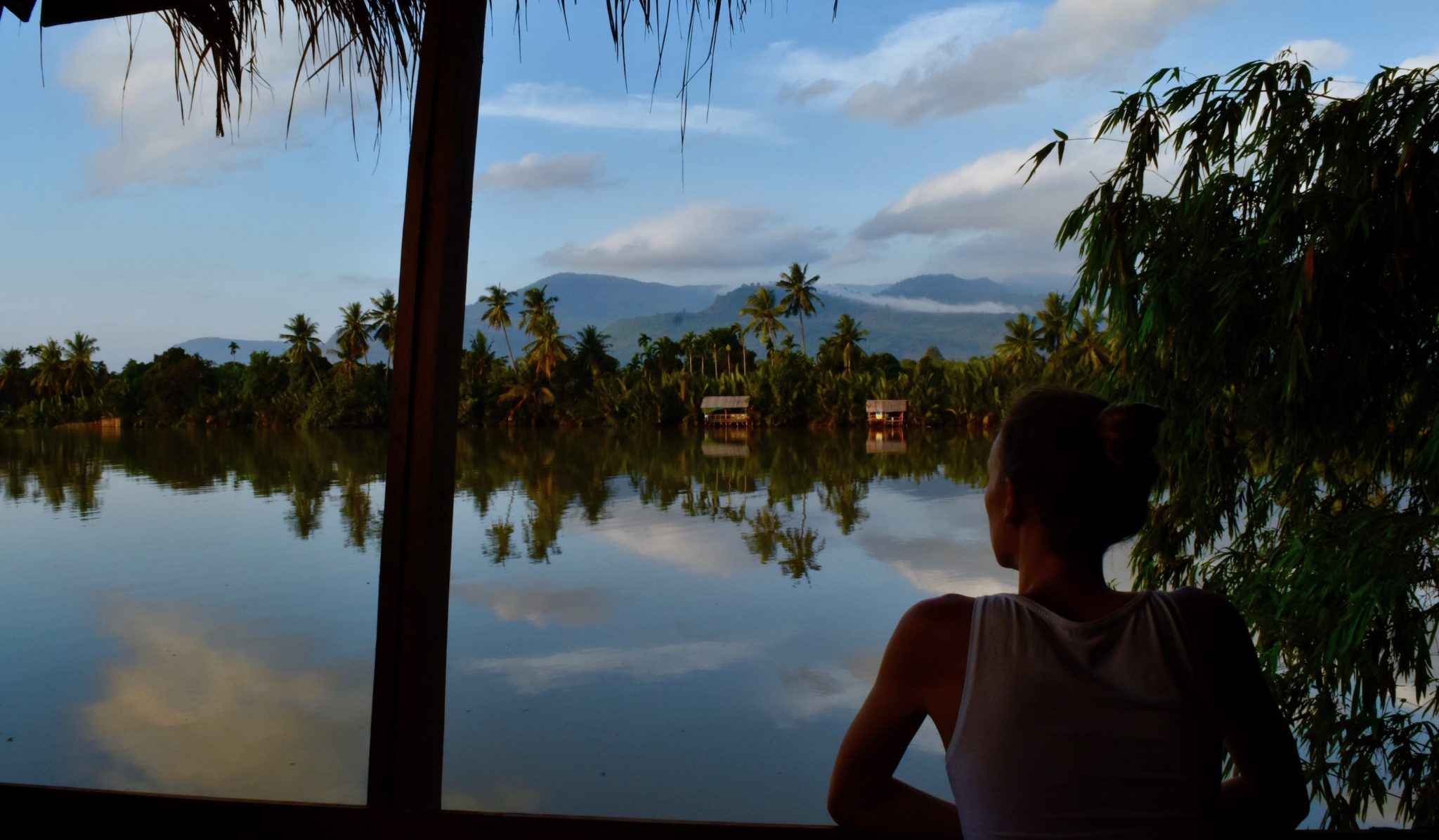 From Kampot, it’s 45 minutes on a bus to Kep. However, for a more scenic route, you can take the Crab Shuttle down the Preaek Tuek Chhu River and out into the Gulf of Thailand. Highly recommend this.

To return to Phnom Penh you can take the train from Kampot, or take the bus from Kep or Kampot. We opted for the bus, purely because the train wasn’t running on the day we were travelling (they don’t run every day). It took 2.5 hours from Kampot to Phnom Penh.

Back in the capital city, we spent a couple of days exploring, before travelling onto Siem Reap. Read about Phnom Penh here. 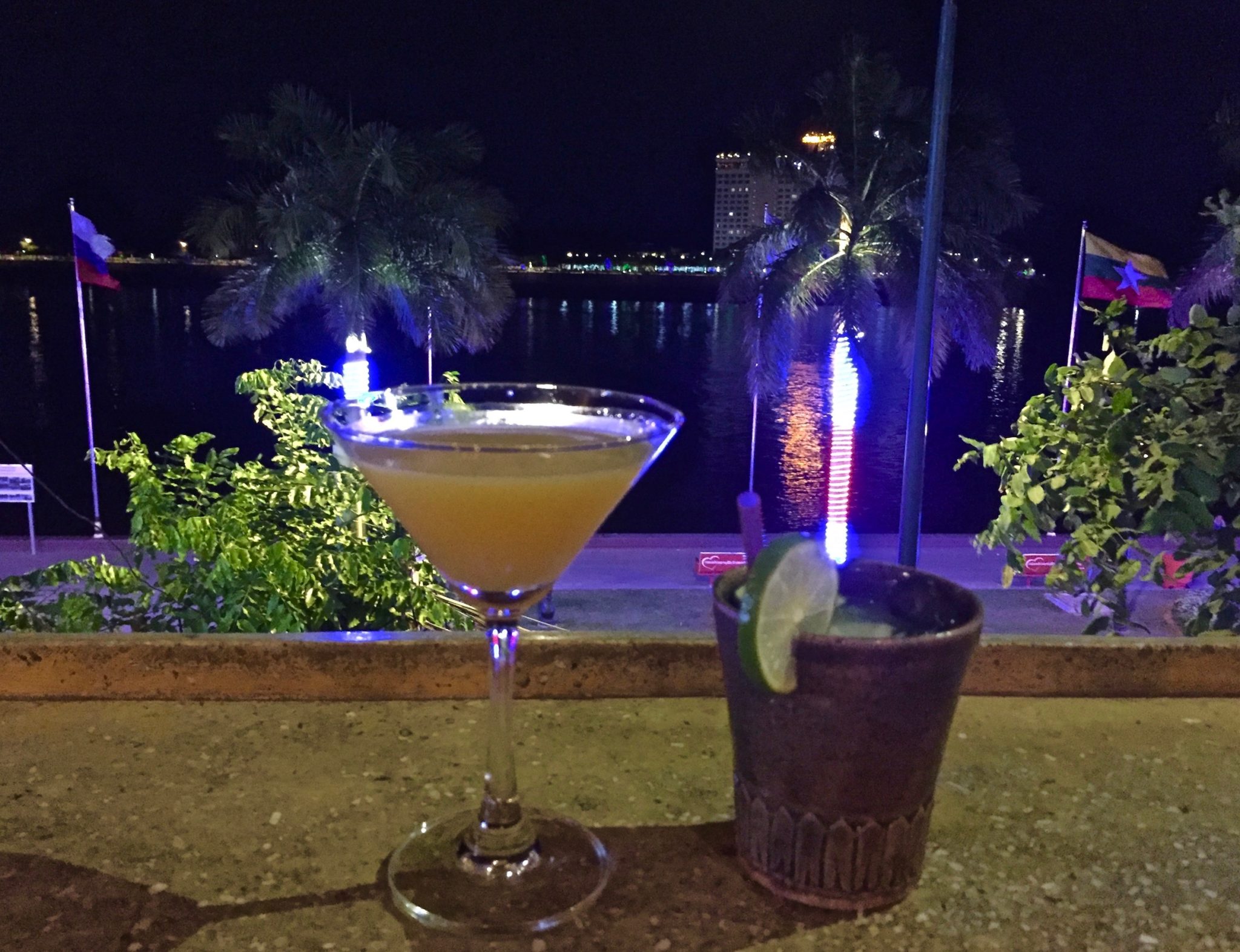 Drinks at The FCC

Now it was time for the night bus! It was actually a pretty good experience. I slept most of the way and actually enjoyed the experience! Again we travelled with Giant Ibis and unless you’re tall you should find it comfortable (I’m 5.6 and Enrico is 5.11 and we were fine). 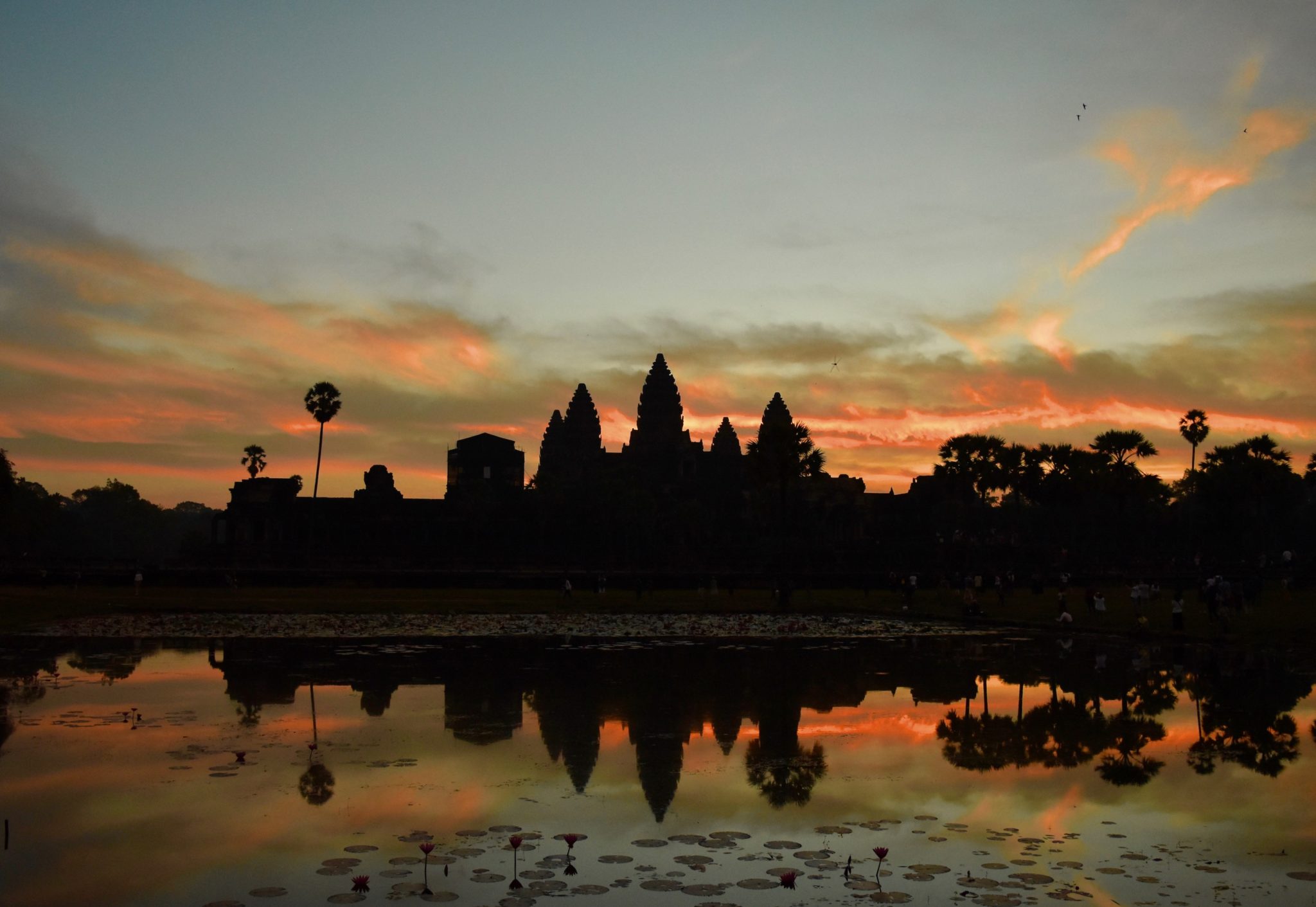 From Siem Reap, we considered heading to Battambang before returning to Phnom Penh but decided it would be too rushed. So took a bus back to the capital.

What To Eat In Cambodia

Cambodian cuisine has an interesting mix of influences including Chinese and French, it also shares many similarities with its Thai and Vietnamese neighbours.

Some must-try dishes during a trip include the following:

Fish Amok – a curry made with coconut milk.

Kroeung – a type of Khmer curry paste made from lemongrass, turmeric root, garlic, shallots, galangal and fingerroot, or Chinese ginger. It’s often steamed in a folded banana leaf and accompanied with rice. 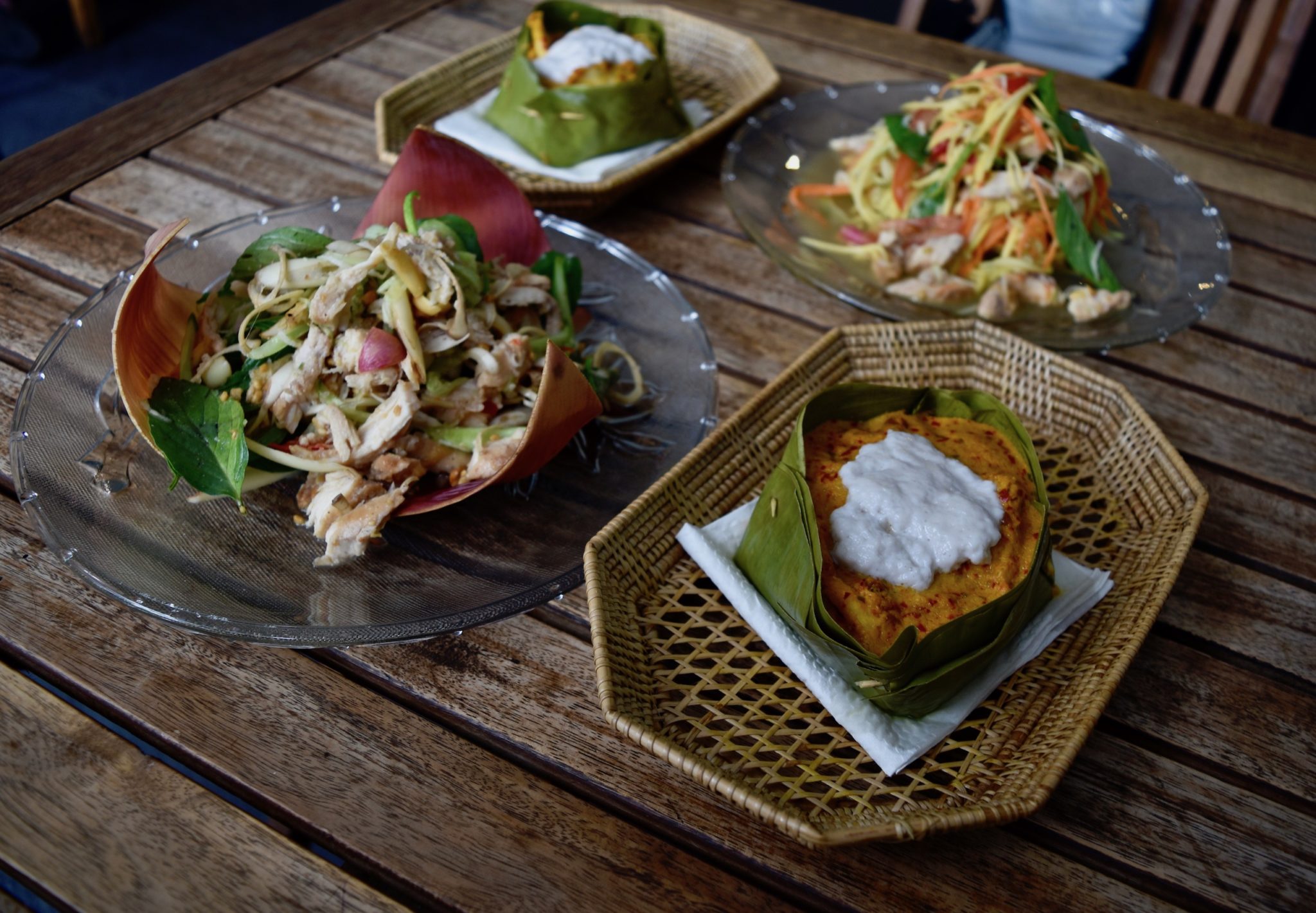 Beef Saraman Curry – (my fave!) A beef curry made with a mixture of spices including coriander and cardamom, coconut milk and peanuts. Yum! (If you go to Kampot I recommend the Saraman Curry at Rikitikitavi). 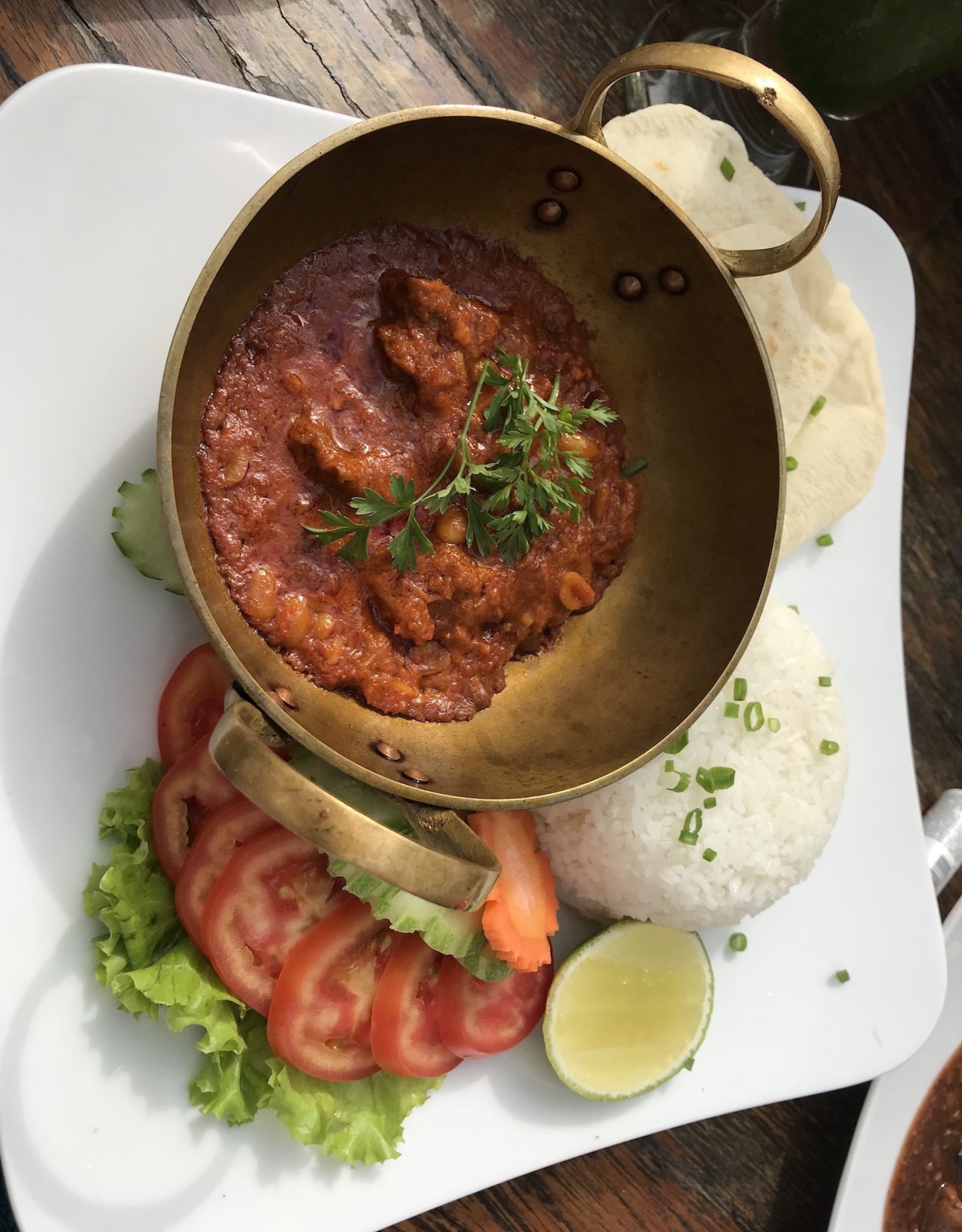 Kep Crab With Kampot Pepper – The famous dish of Kep features the locally caught crab served with a green peppercorn sauce, created with pepper from Kampot’s impressive pepper plantations. A must try. 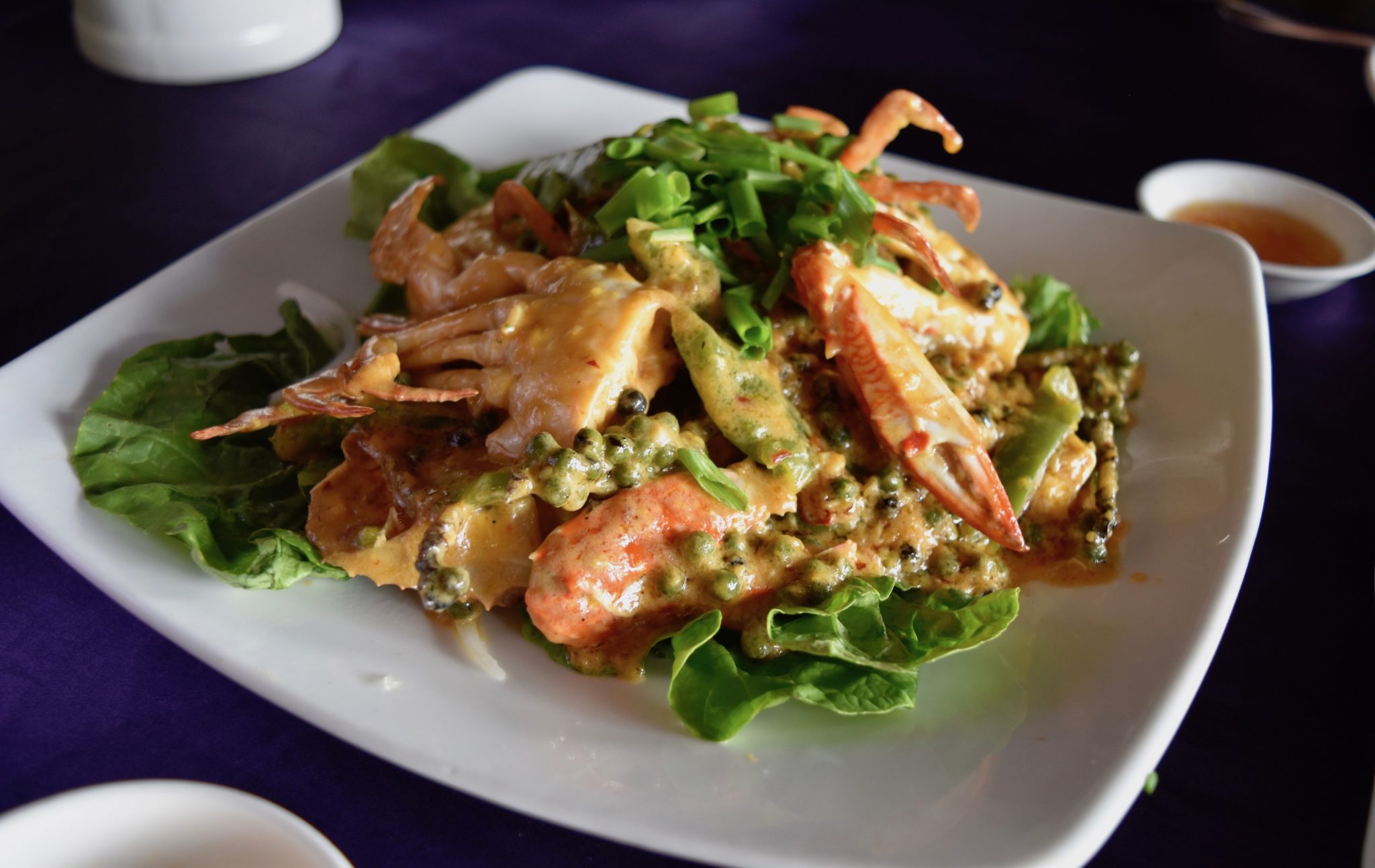 Banana Flower Salad/Green Mango Salad – These two salads are light and refreshing and great for lunch, often served with chicken or fish. Both contain shallots, garlic and chilli.

Kuy Teav – A popular soup made with clear, light, pork broth, garlic, greens, scallions and noodles, eaten at all times of day. Usually served with pork but sometimes other meats.

Deep Fried Tarantulas, Crickets and Snakes – you’ll often find these at street vendors, although I have to admit I wasn’t brave enough to try them! 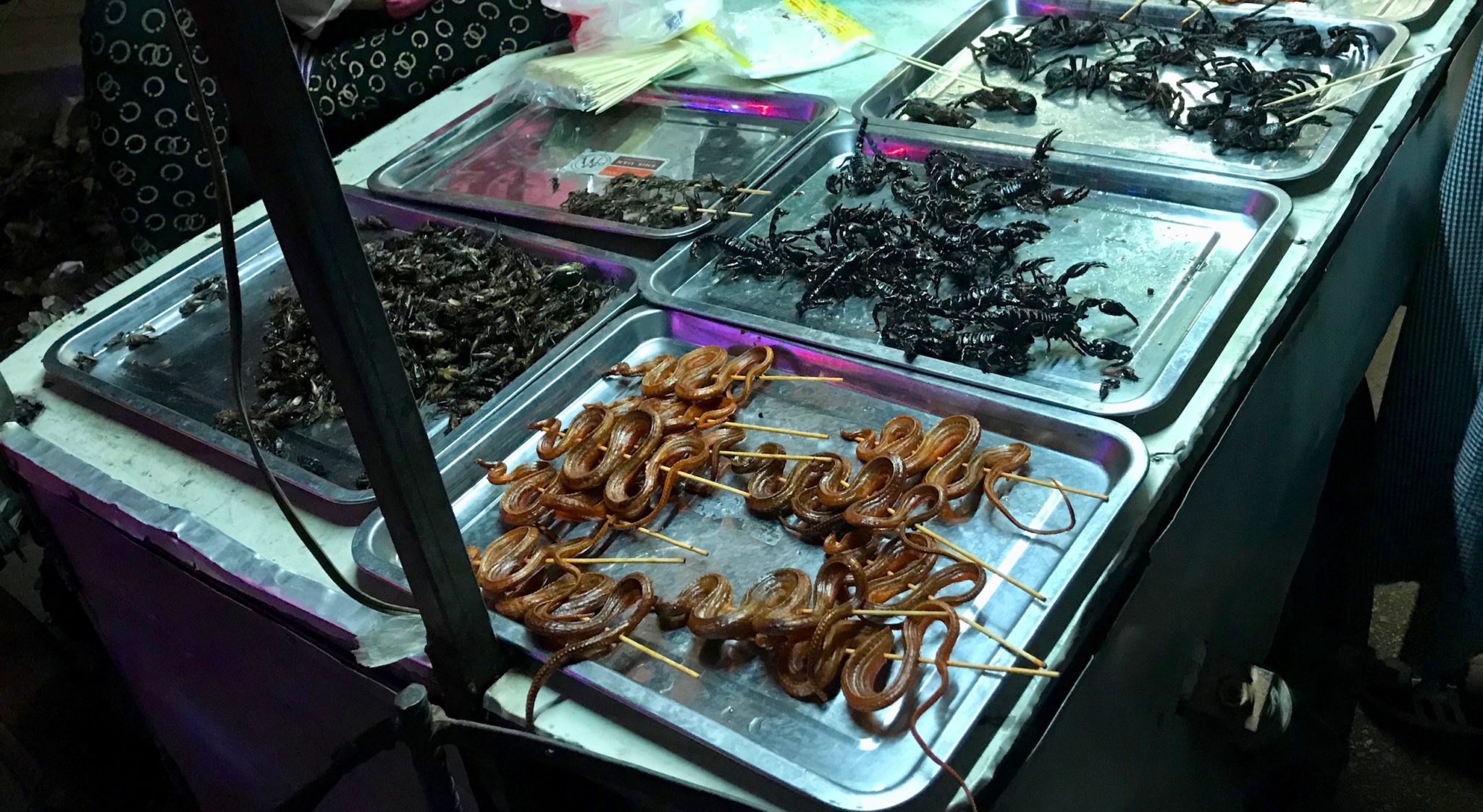 Cambodian accommodation, in general, is great value. We stayed in some excellent guesthouses with air con and hot water for less than £10 a night. If you want to go really cheap, there are beds in hostel dorms for less than £5 a night. And if you have some money to spend there are some fabulous hotels. Our favourites included:

The Great Duke in Phnom Penh

Rooms start at £130 ($180 USD) per night.) Formerly Intercontinental Phnom Penh, this hotel has the most beautiful pool. 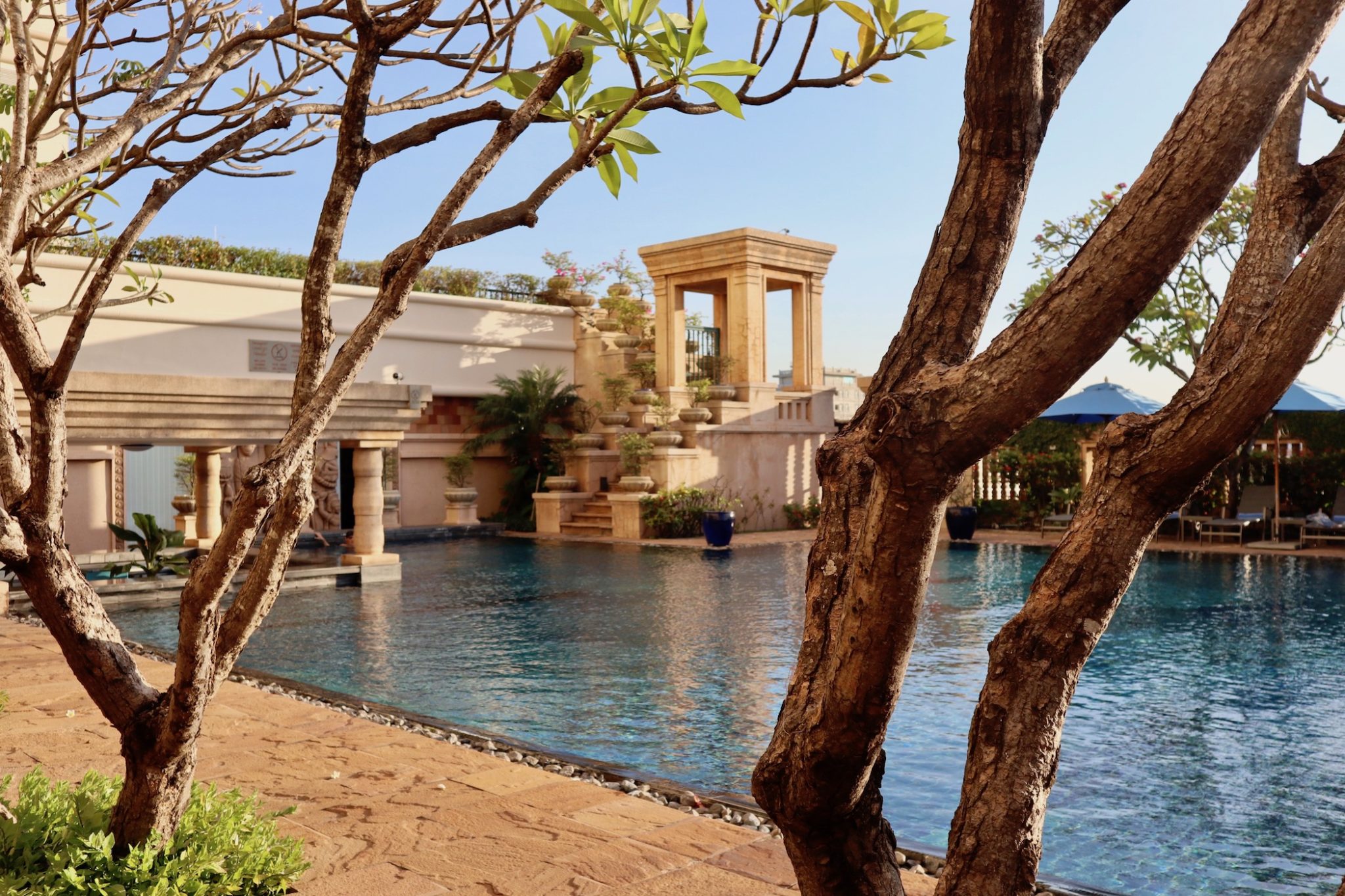 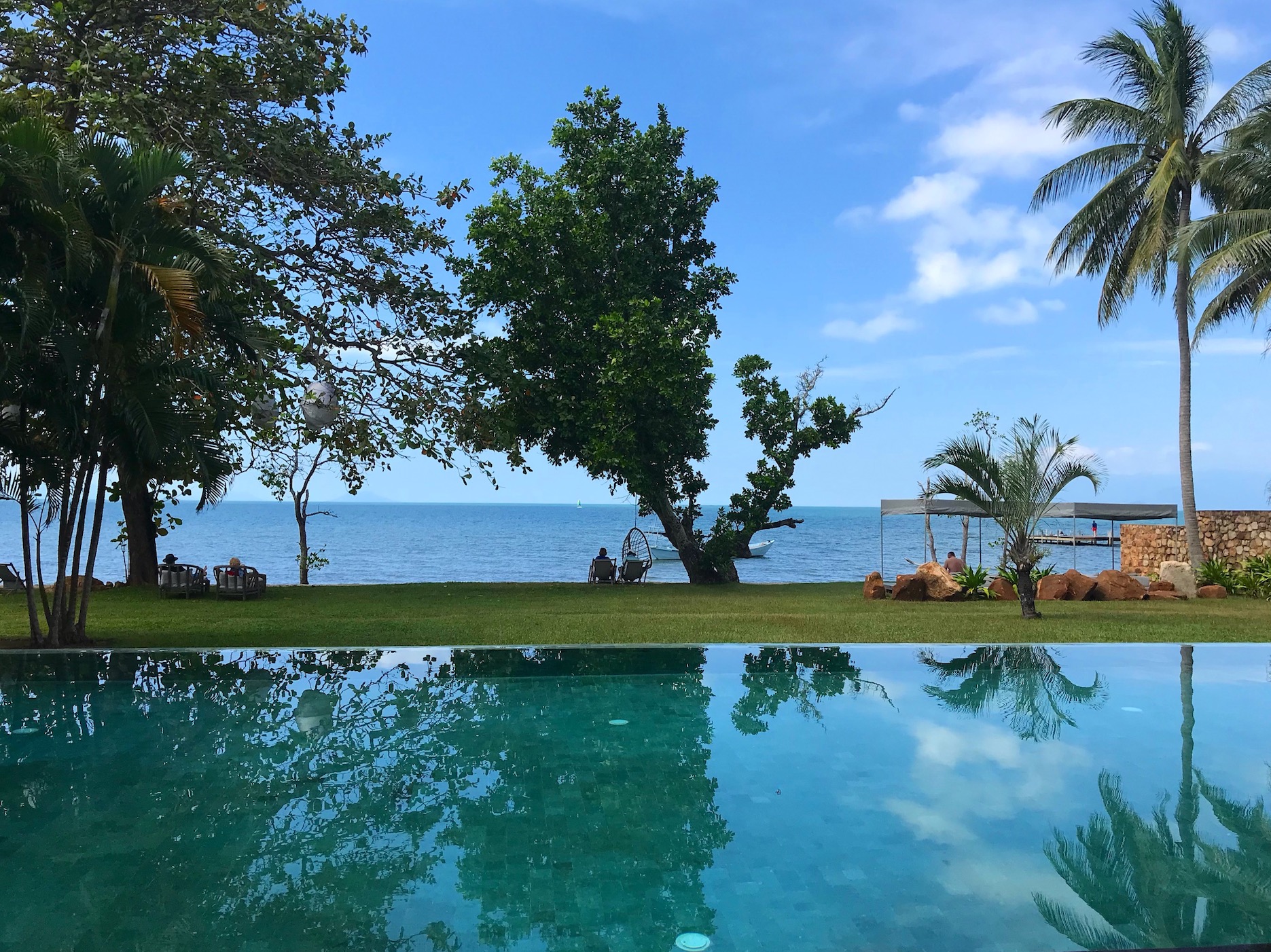 Greenhouse and Sabay Beach in Kampot 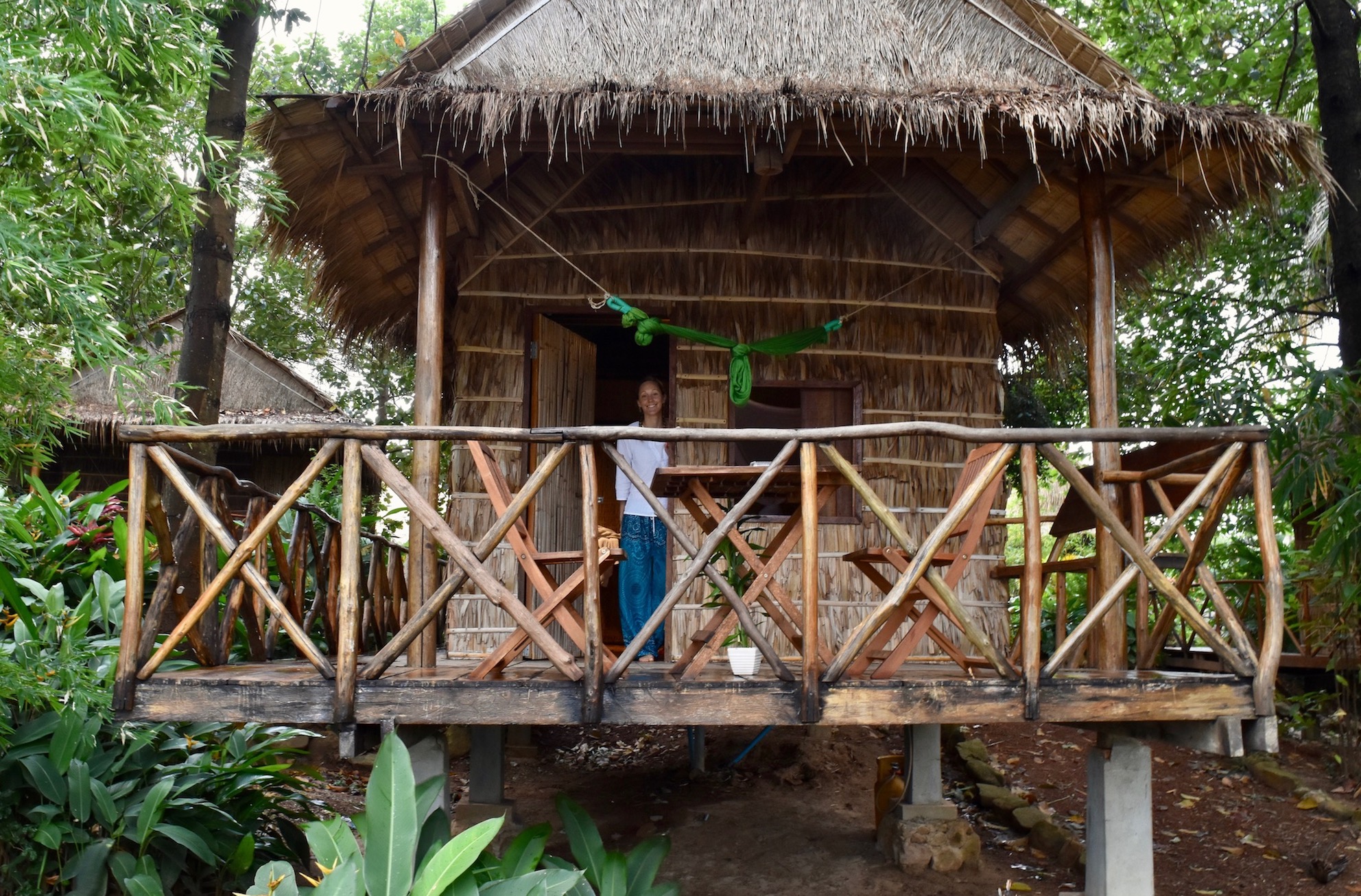 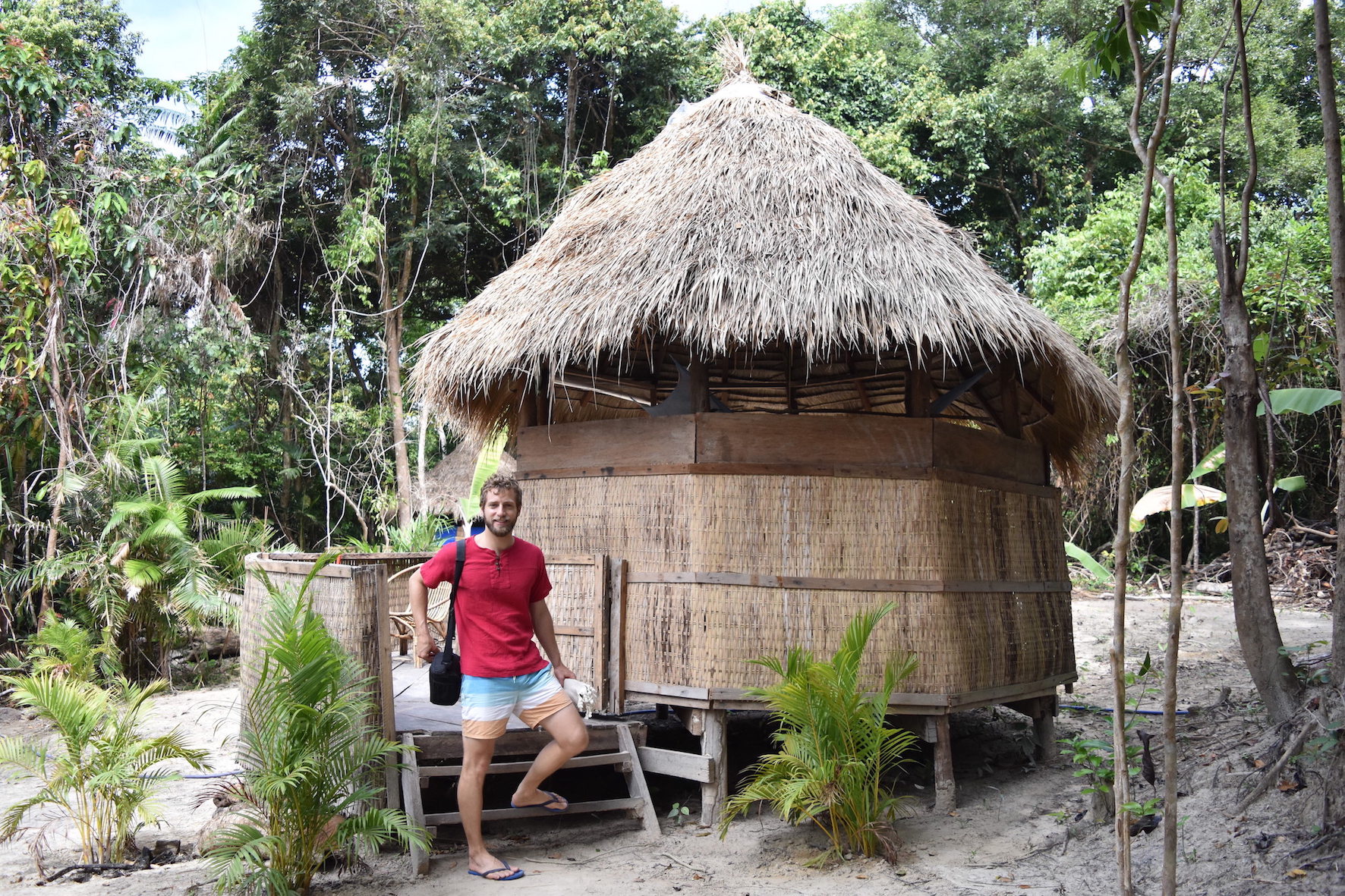 We had an incredible two weeks in Cambodia, and I can happily say I haven’t outgrown backpacking just yet!

Disclosure: This article contains affiliate links. This means that if you click a link and purchase something I’ve recommended, I’ll earn a small commission. This does not affect the price you pay and I only use affiliate links for products/brands I have experienced and recommend.

Things To Do In Siem Reap, Cambodia (Updated 2020)